Bullying or Slagging? Teach kids the difference - The Confidence Clinic Skip to content 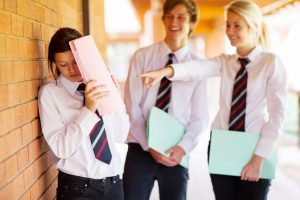 The Bullying word is thrown around a lot. In recent years schools are helping educate our kids, and have really encouraged kids and teens to identify bullying, and to speak up and tell an adult. The work that I do coaching kids and teens, is more about giving kids the coping skills to deal with bullies and mean words. It’s about dealing with it in your own head. I always start by explaining to kids that there will always be times in life, when you have to deal with mean words, it doesn’t matter if you are 6, 16, 26, 48, 79… whatever age you are there are people that will upset you, if you let them. I also try to help them to understand that we may never know the reasons why someone bullies; everyone has their own stuff going on, and we don’t need to understand it. They may be dealing with a bully in their own life, or some other bad experience, and its a way for that person to feel better – to make others feel worse. (It’s no excuse though.) But most importantly we don’t have to pay attention and allow the mean words into our head to run around and continue to upset us.

The problem is, sometimes the bullies use words that cut close to the bone, and its not easy to ignore it. If a child is slightly overweight and is called fat, it’s much harder to dismiss it. It can eat away at the child’s self confidence.  So when bullying is taking place I try to decipher if what is being used against the child is true or not. Here are some of the questions I have in my head when coaching a child who is being bullied:

If the slagging is getting too harsh the person receiving it MUST let it be known that they’re not happy about a certain comment and they want the person to stop. (It doesn’t matter if it wasn’t meant in a bad way, or was just a joke, once its unwanted they have to speak up and we must teach our kids to know when to speak up and also from the other side when to stop.)

Below is an example of how to bring it up with someone close:

Slagging can turn into bullying if the harsh words continue after being told to stop.That’s when adults should really get involved. We, as parents, should be there to help our kids and their friends, and pass on messages or warnings (without getting defensive) if someone if feeling picked on, excluded or bullied. I also believe in teaching our kids to stand up for others, and not stay quiet if they witness bullying.

I have to add a little story here – As a teenager I was walking to  School one day with my friends, (an all girls school in Artane) a mother was walking past us with her son (in the opposite direction towards the boys Secondary School St. Davids) and she started screaming at us that we were bullying her son! I was shocked..she was really aggressive and very angry with us.  There was always banter between us girls and some of the boys that we knew – we took it, as much as we gave it, and to us it was just silly light hearted banter to break up the long walk. The boy involved, was younger and in Scouts with us and he took our slagging to heart – I honestly can’t remember what we said to him each day, probably called him by his nick name whatever that was. As much as it was meant in jest we simply didn’t know that we were upsetting him. We would never have known how he felt if we weren’t told – the message is – teach your kids to speak up or if they can’t, get adults involved. Kids and teens don’t always have the emotional intelligence to realize what they are doing.

Bullying is also done in so many ways – cyber bullying for example is not always direct and obvious, it is sometimes subtle, people playing mind games where ‘friends’ exclude you from meeting up, but you see the photos after, or don’t like your posts or leave an unwelcome comment. If your teen is not able to cope with the mind games that are going on, then try get them to agree to take a break from that app or social media altogether even just for a few days /weeks or a month, ask them to think about what’s going on and come up with a way to cope, if it happens again. Or get them some help to talk it through with someone independent of the family (It’s hard to get a teenager off completely – remember their friends are their life and their world. And social media is such a huge part of this world now whether we like it or not.)

Bullying can also be physical, and I don’t just mean someone hitting/punching/kicking. (Typically this is where I find the usual response from most Dad’s is to teach kids to hit/punch/kick them back and whilst I don’t ever encourage violence, I don’t completely disagree – there are times that a physical response is needed to send a message,  even though I know that won’t be a popular comment!) But sometimes the bullying is more subtle – kids are clever and throw stones on the way home or bits of paper and other items across the classroom. I always encourage kids to stay away from the kids that are being mean /bullies. It’s amazing how many kids just keep going back to try be part of the cool gang – they want to be accepted. Finding and keeping nice friends takes work and I encourage kids to work on their friendships.

Get the School to help

One other tip for bullying, is if it’s happening in School or on the journey to /from school; talk to the teacher and principal as early as you can – I know some schools, that instead of identifying the bullies directly will give a stern talk each class about what is acceptable behavior and what is not. Giving the chance to save the identity of those involved but letting them know, that they know what’s going on…

It is impossible to shield our children from the bad stuff that happens in life, not everyone is going to like them, but what we can do is give them tools to cope; teach them to speak up for themselves, or to ignore comments (I mean really ignore and not pay any attention to whats being said), to recognize when someone is having a laugh with them, and decide what to do when it goes too far, or when someone is just having a bad day. Some personalities are particularly sensitive and it can take some hard work to equip them with the tools to cope.

Whilst we’re on the topic of teaching kids to speak up for themselves, and deal with mean words, I’m happy to say that we are running The Confidence Clinic Summer Camps again this year. Full of games, fun and positive lessons for 7-12 year olds. The bookings are now open and we are taking a limited number in each camp. We will cover the following topics:

At the moment we have 5 locations open for bookings – Dublin, Cork and Galway. Read more about the Summer Camps here. In addition, we are looking for more adults to work for us, in order to run them in more locations around the country – thanks to huge interest last summer. We will provide full training and garda vetting is essential. If you are interested or even intrigued please read more about working on our Summer Camps here. Please drop us an email ASAP and before May 20th 2019.

2 thoughts on “Bullying or Slagging? Teach kids the difference”