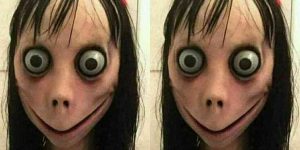 So in the last few days, Momo has come into our lives, and my kids are terrified and not able to go asleep! This is the game that encourages children to self-harm and consider suicide; – firstly what kind of sick people are there in the world that would come up with this? And secondly, I know I’m not the most technical person in the world, but how is it still even operating and how has it not been taken down / or how have the ads not been cancelled?

What I really want to discuss here, is how to help with the terrifying image and stories that are frightening our kids. In order to warn kids about this game, parents and teachers have been discussing it with them – and rightly so, they should know. My kids are not online very much – one hour per day at the weekend ‘officially’, but they are listening to all the schoolyard talk and rumours about Momo. Both my 8 and 9 year old have been afraid going to bed at night and woken up a few times over  Momo. My 8-year-old is afraid that Momo is under her bed, and she believes that she can hypnotize you into killing yourself – she woke up at 2 in the morning and we got the light out to show her there was nothing but a mess under her bed. My 9-year-old is afraid, even though she knows its just an image and a game, it’s got her spooked.

Here are a few tips to help with Momo fears:

As always I hope this helps someone. If anyone needs someone to one coaching help with their kids or teens please contact me below.
Caoimhe x
Caoimhe O’Grady Tegart : Child & Teen Life Coach
The Confidence Clinic : Empowering Children and Teens
00353833425364 : http://www.theconfidenceclinic.ie
Share
Tweet
Pin