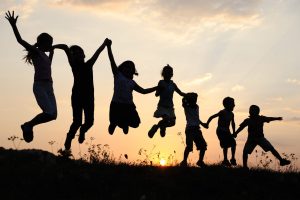 Who wants happy kids? I know I do. I’ve recently read 2 books on the topic; Both overlap and include lots of valuable lessons and reminders, so I’ve decided to summarize them together, so there’ll be 2 blogs on this topic – this is the first. I should tell you first, that the Danes claim to be the happiest nation, and Dutch claim to have the happiest children. (see end notes)

The first book is ‘The Danish Way of Parenting – what the happiest people in the world know about raising confident capable kids’; and the second is ‘The Happiest Kids in the World- bringing up children the Dutch way’. The main topics covered here in part 1, are; play, trust and authenticity.

We all know that our children should be playing more and on screens less, I am a culprit of this as much as the next person, but I’m really working on changing it now. But why is it so important? The skills they learn from playing with other children of all ages, are so valuable for their social skills and their lives; if you think about it, our children learn to interact, to argue, to defend themselves, to negotiate, to share and to deal with bad stuff happening to them, when they play. Free play should be taken more seriously, as it is a tool that helps children deal with life, and the various people and situations they will come across.  Free play is said to reduce anxiety and increase resilience and their ability to bounce back.

Wow! This is big! I’ve been coaching children and teens with some serious anxiety over the years, and all the indicators show that anxiety is on the rise, so it makes sense to me, that our change in lifestyle over the years – watching more and more tv, playing video games, the use of phones, the internet and social media… is costing our children dearly. Research has shown there is a direct co-relation between play and coping skills.

Both the Dutch and Danes generally don’t have tons of activities scheduled for their kids (hence there is time for play!) nor do they push or pressurize their children to do well – they believe in trust and giving them space to grow and learn, to master things themselves and find their own solutions. In the Netherlands there is much less competition and comparisons made. The Dutch also believe in sitting back and observing kids play and not jumping in and interfering in the playground and elsewhere – allowing play to teach kids lessons. I’ve been encouraging my own children to do this more and more and they seem to be enjoying it, not just the extra play time but being left alone to get on with the play without any interference.

Finding their own solutions

Another tip from the Danes is; children need to feel that they have control over their lives. (Studies show that those who don’t feel they have control are more prone to depression and anxiety later on.) So when they come to you with a problem, or complaint, try not to solve their problems and ask them – ‘what do you think you should do about it?’ This technique is used a lot in coaching, kids have more ownership and are committed to solving the problem, because they’ve been part of the solution.

The Dutch allow their children to cycle to and from school from around 8 or 9 years or so, depending on the distance and situation, in addition, many children often spontaneously call to friends houses to play and don’t go straight home from school, without fear of getting into trouble. The Parents don’t seem to fret or worry as much about pedophiles, they know that they exist, but they teach their children rules to follow. They don’t have the same ‘fear culture’, papers are not reporting on the topic every week, it’s not talked about as much as it is here. They also leave their children alone in the house at an earlier age. I must admit I struggle with the extent of the freedom that I read about from the Dutch, but I think we all have to find what feels right for us, our families and our kids, whilst not giving in to the fear and anxiety in our heads.

The Dutch have fantastic bike lanes and all children have to pass a cycling proficiency test. Whilst we unfortunately don’t have the same set-up in Ireland, UK and many other countries; we can still take a leaf out of their book and get our children walking, cycling, scooting to school or to other places more often, and give them the trust and confidence to take journeys on their own. Accidents happen but teaching children rules to follow such as the safe cross code and observing them putting the rules into practice, whislt we’re with them, should help us to let go…

Don’t get me wrong, it frightens me too, but don’t we have to let go in order to end up with an independent adult? The issue of letting go hits us Parents a lot, but at different stages and in different ways; life is changing all the time as our children grow, going to school, moving to secondary school, then college and hopefully travelling the world. We have to prepare them as best we can. My secret wish for my kids when they get older, is, I want them to be like the European teenagers, you know the students who come to learn English, and stay away from home with host families, they seem able to navigate around a foreign city, enjoying the freedom and fun of being away from adults, seeing life as an adventure, instead of a world full of fear.

The Danes allow their children to read stories and see movies with sad or tragic endings. They make sure that their children read stories that are factual, true stories and also stories that do not have Hollywood endings. This allows them to discuss their emotions and feel gratitude for what they have, it’s also going to prepare their children for real life. We also need to let our children know that bad things happen, its okay to feel different emotions.  The only way we can do that is to allow them to see all of our emotions and not be afraid of being emotionally honest. We have to be the model of honesty. Putting on a brave face and smiling and saying everything is okay when really its not, is teaching our children to do the same, we are burying our true feelings, as if there is something wrong with being upset or unhappy.

My daughter was learning about the Titanic recently in school, she was really enjoying it, but she was also getting upset by some of it. We watched some you-tube videos of the survivors telling their stories. I made a conscious effort not to hide my own emotions, which I would have done in the past. I allowed her to see my tears and talked about how sad and tragic it was, as children said goodbye to their fathers that night, never to see them again. It makes sense to me, to follow what the Danes are doing, and allow our children to realize that life is not all Hollywood endings and bad things can happen. Protecting them from sadness and loss is not going to serve them well in life.

Now this next one is a big change for me, you may have already heard before that specific and genuine praise for a task is much better for children, that’s understandable and makes sense. Recent studies have shown that if we want our children to be successful, we should not tell them they are clever or smart! Instead encourage a growth mindset engaging in conversation about the process -instead of saying ‘You’re so clever’ you should say ‘Well done, how did you figure that out?’ Children who are told they are smart believe they have a fixed mindset and don’t stretch themselves as much to continue learning, if they don’t get something correct immediately, they give up quicker than others. On the other hand if you encourage a growth mindset, that we learn throughout our entire lives and we never stop learning, then children work harder at tasks and don’t give up, leading to more success in life. This makes sense to me but I personally have to bite my tongue to change this one, as its something I’ve always told all my children!

Finally this one you will hopefully find easy – children love to hear about your own childhood (good & bad, funny and sad) so tell them as many stories about what happened to you. In general being authentic is about being honest in your answers to their questions, which teaches them to be honest in turn.

So that’s part 1 over, I know that’s a lot to take in, I felt a little overwhelmed at first too, when I read these books and realized all I should be doing! But this blog is not about making us feel inadequate as parents, its about giving us information, tools and power to help our children the best we can, as I’ve said in last week’s blog on confidence none of us are perfect. Here are a few top tips to summarize part 1.. if you’d like to try a couple to start with, it’s much easier.

You my friends are my marketing department and if you think this may help someone please like, share and sign up for more, part 2 is next week.

‘The Danish Way of Parenting – What the happiest people in the world know about raising confident, capable kids’. Jessica Joelle Alexander and Iben Dissing Sandahl

*OECD (Organisation  for Economic Co-operation Development) – in almost every survey since 1973, Denmark has been voted as having the happiest people. In 2013 a Unicef report rated Dutch children the happiest in the world this followed a 2007 Unicef report where the Netherlands was heralded as a prime example of childhood prosperity.

‘The Relationship Between Childrens Locus of Control and Their Anticipatory Anxiety’, Ho Cheung William Li and Oi Kwan Joyce Chung

‘Intelligence Praise Can Undermine Motivation and Performance’ Journal of Personality and Social Psychology 75. no. 1.(1998) C.M. Mueller and C.S. Dweck.