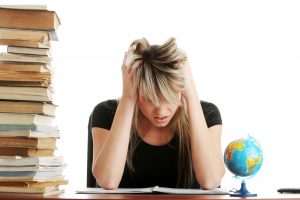 I believe as Parents we need to listen more to our children, no matter what their age. I think it helps give our children confidence and lets them know their voice is worth stopping and paying attention to.. After all if we, their Parents aren’t going to listen then what chance do they have in the big bad world! Sometimes the Parents (or one Parent) can be a big source of anxiety or stress, highlighting how much or how little work has been done. It can cause a lot more tension and arguments in the house then is necessary. Its true, in my experience that some need encouragement, motivation and sometimes external help to get them onto the right road, to help them to study. Some will work away self motivated without a word needing to be said. Others realize too late that everything their Parents said was true. But they just didn’t want to listen at the time. In my opinion, fear and guilt are the worst motivators that we can use to try and convince someone to do something.

I’ll use the example of a child studying for an important exam. The parent is saying ‘you better study or you won’t do well.  You don’t want to fail do you?’ In this example without even thinking about it the Parent is using fear to try to get the child to study. The child’s reaction can be many, but it may result in a limiting belief that the he is not very clever and is capable of failing and not doing well unless he or she works very hard. This may not be true. It also may lead the child to an all or nothing mentality. ‘Well I don’t really know where to start and its all getting a bit much so I’ll just do nothing/ it’s too late now anyway, I’ll never get through everything’. I’ve coached Teenagers who’ve been saying to themselves ‘I’ll never know enough’ and ‘I haven’t done enough’ ‘I can’t cope with the pressure’ – these were quite intelligent and studious students. Also from others less studious – ‘I haven’t even started’, ‘I don’t know how to study’ are also common. I’ve coached students who have had nightmares for months before the exams and some adults who still have nightmares that they are going into an exam and haven’t studied. It is a highly pressurized time, and it lasts too long. The best way to help a teenager through it is to talk to them and really listen to what they are saying. To stay off their case and be as supportive to them as possible. One client of mine wanted his mother to be on his case (even though she drove him nuts and never left him alone), it made him study. Others just made them feel more isolated from their parents.

I find if there is a clear motivation or goal, which is pushing him/her to do well when s/he finishes school, that may be enough for the child to manage his or her own study time table. The child knows what he would like to do after school and realizes that he has to get very good exam results to get into the course. Some teenagers still need help with motivation even when they know what they need to do.

I recently heard a teenager explain the change in her motivation towards studying for her leaving cert  – She said ‘you’re told to study, study, study. But for what? Why am I studying? Just to get good results? Until I figured out what I wanted to do, and realized the grades  I needed I had no interest in studying just for the sake of it. But after I decided, then I was so focused.’

When I carry out career coaching with a client, we focus on the individual, not what anyone else expects, purely the individuals strengths, interests, hobbies, favorite subjects.  A teenager should be encouraged to explore every opportunity available to them, research every possible course and the requirements. Reality must be a part of the decision making process which is why its good to have a neutral 3rd party involved.  Also isn’t it important to teach our teenagers, that changing your mind later on, is not the end of the world, in fact its quite common. We can only make the best decision for now, not forever.